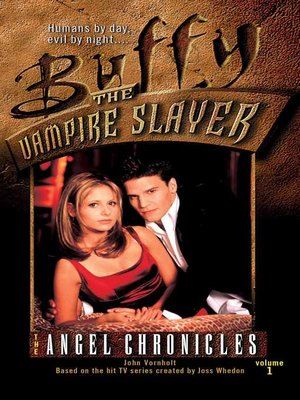 View more libraries...
Angelus
BORN: Ireland DIED: Ireland
CURRENT RESIDENCE: Sunnydale, CA
AGE: 242 years and counting
"Things used to be pretty simple. Hundred years, just hanging out, feeling guilty. Really honed my brooding skills. Then she comes along."
After a century of killing without a care, the vampire Angelus was cursed with a conscience and eventually fled to Sunnydale, where he restricted his feeding to blood banks.
Until 16-year-old Buffy Summers, the Vampire Slayer, arrived in town to battle vampires, demons and the Forces of Darkness. First, he has to convince her not to kill him. Then, he has to convince himself not to fall in love with her.
Now, collected for the first time, are three stories from the cult-hit TV series chronicling the beginning of this star crossed love story.
Can Buffy and Angel survive life, death...and beyond?