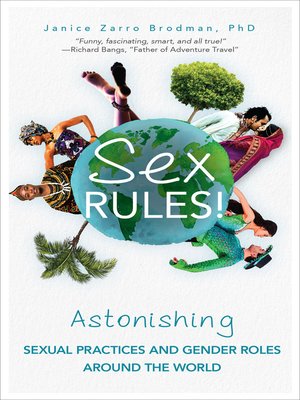 View more libraries...
"[Brodman] shares the results of years of research and world travel to show . . . just how wildly divergent ideas about sexuality and gender roles can be." —Vice

This book is a humorous glimpse of a wide range of stereotype-busting sexual, relationship, and romantic mores around the world. It is fun, interesting, and eye-opening! For example, places where women control the mating game, set marriage rules, and marry one another for political power. The fact that it's all true also makes it fascinating. Take a romp through a rollicking worldwide tour with LOL views of extraordinary sexual customs. It will astound and regale you. At the same time, it proves sex is like happiness—universally sought but subjectively enjoyed.

"This is the world's weirdest and funniest reality show. But it's more. It's fascinating and smart, and all true." —Richard Bangs, adventurer, author, and TV personality

"Fresh, intriguing and of course titillating . . . delve into rarely seen corners of the world, enjoy a good laugh, and learn from a trained scholar as she takes you on this journey that reveals 'Sex Rules' in all their staggering variety." —Ed Robbins, award-winning director-writer-producer and digital journalist