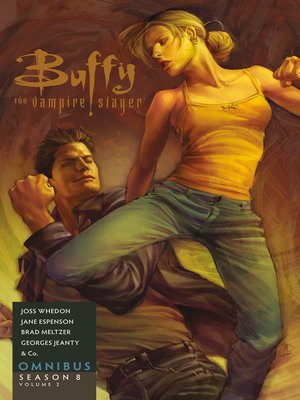 View more libraries...
Creator Joss Whedon's official sequel to Season 7 of the television series continues in this second of two volumes that contain the entirety of the Chosen One's eighth season of fighting demons and dark forces to save the world and mankind.
This oversized omnibus edition includes the last four arcs of the Season 8 series along with one-shots and short stories written by Joss Whedon (The Avengers), Scott Allie (Abe Sapien), Steven S. DeKnight (Pacific Rim: Uprising), Jane Espenson (Once Upon a Time), Drew Goddard (The Martian), Drew Z. Greenberg (Marvel's Agents of S.H.I.E.L.D.), Jim Krueger (X-Men), Jeph Loeb (Lost), Brad Meltzer (The House of Secrets), and Doug Petrie (American Horror Story), with art by the acclaimed Georges Jeanty (Serenity), as well as Karl Moline (Fray), Cliff Richards, Camilla d'Errico, and more. Also included in this volume is a cover gallery showcasing all of the variant covers that were produced for the comics and collections.
Buffy experiences Big Bad Twilight's overwhelming reach through the strange and sudden mass popularity of vampires (they even have a spokesperson with a reality TV show, Harmony Kendall!) that leads Buffy and her Slayer army to come under public scrutiny. As the world's distaste for Slayers grows, Buffy takes her troops to a refuge in the Tibetan mountains, where she hopes to receive some help from longtime friend—and werewolf—Oz. Following a losing battle against Twilight's insurmountable army when their location is discovered, Buffy finds herself imbued with mysterious new superpowers. As she tries to pick up the pieces in the aftermath, she discovers allies gone missing and unexplained massacres of Slayer squads around the globe. This leads Buffy straight to Twilight for a confrontation that rocks the earth's foundation . . . Then in their Season 8 debut, Angel and Spike come to Buffy, each with vital information that guides her back home to Sunnydale. While the remaining Slayer squads fight an onslaught of demons raining down across the earth, Buffy faces the ultimate betrayal and suffers through sacrifice as she scrambles to finally put an end to Twilight and save the world from complete destruction. The losses are great, and when the dust settles, everyone and everything will be different . . .