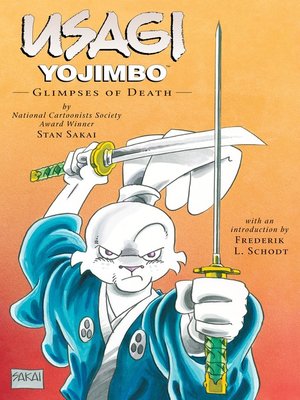 View more libraries...
Wandering ronin Usagi Yojimbo is alone once again, having emerged from his travels with young Jotaro. His brief respite from danger was not destined to last long, for adventure in feudal Japan waits for no one! In this volume of the internationally acclaimed series, master storyteller Stan Sakai treats readers to intriguing tales of Usagi on his own and catches up with a bevy of fan-favorite characters - "whodunit" maestro Inspector Ishida has another puzzling mystery to solve, bounty hunters Gen and Stray Dog are each on the tail of the possessed swordswoman Inazuma, bodyguard Tomoe has a new political rival in Lord Noriyuki's court, and Priest Sanshobo's temple is plagued by a vile demon! Throughout these stories we follow Usagi as he is roped into a covert smuggling operation, escorts a cantankerous old woman through dangerous territory, assists an inventor with a visionary flying machine, and once again encounters a vengeful young samurai.
• Featuring a rare short story starring Katsuichi and young Usagi which has never seen print in the Usagi comics series!