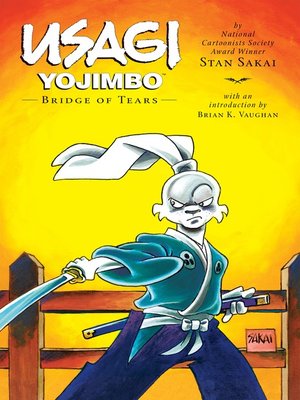 View more libraries...
The wandering life of a ronin is often a lonely one, and Usagi has been on that path a long time. A temporary peace, staying with the merchant Endo and his daughter Hanaka, is interrupted by the deadly League of Assassins, setting Usagi back on the road, but with the uncomfortable sensation that he is being followed.
* Collects issues #94-#102. This volume also includes the landmark Usagi Yojimbo #100, a celebratory roast issue featuring contributions from several of the best writers and artists in comics including Frank Miller, Matt Wagner, Jeff Smith, Sergio Aragonés, and more!
Introduction by Brian K. Vaughan!
“Matching the writing, Stan Sakai's cartooning remains a lesson to anyone wanting to learn the craft. Well-researched details ground each scene in reality, while the carefully chosen angles and zooms maximize the humor or drama of each story beat . . . Long story short, Usagi Yojimbo continues to be the best adventure comic in the world today, and Bridge of Tears is simply more evidence.” -Newsarma