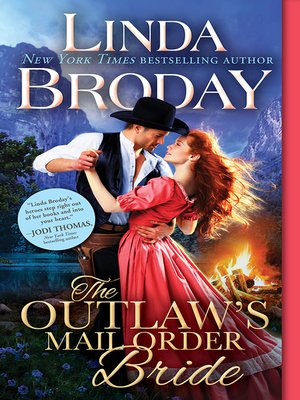 When the West was wild
And man's law favored the few
These extraordinary women could be found...in the heart of an outlaw.

Former outlaw Clay Colby is abuzz with his mail order bride's expected arrival. He's fought long and hard to drag Devil's Crossing out of lawlessness...so when his homestead is set ablaze by a bitter rival, he's heartbroken. There's no woman in the world who'd stand by him now.

But Talley Shannon is no ordinary woman.

After escaping the psychiatric hospital in which she was wrongfully detained, Tally only wants someone to protect her and the little girl under her care. She doesn't mind that Clay's home is dang near burned to the ground—not when he makes her feel so safe. So cherished. But it's only a matter of time before the ghosts of her past come calling...and her loving cowboy must defend his new bride—and the family they built together—to his very last breath.

What People Are Saying About Linda Broday:
"Fans of classic Western tales will delight in the rough-and-tumble world Broday creates..." —RT Book Reviews for To Love a Texas Ranger
"A shining example of the talent of one of the best historical western authors." —Fresh Fiction for Forever His Texas Bride
"Broday's Westerns always captivate with realistic settings, rugged cowboys and feisty heroines." —RT Book Reviews, 4 Stars for Forever His Texas Bride