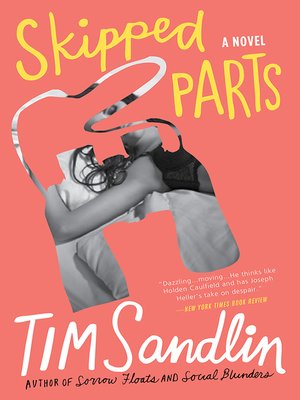 "Skipped Parts is somewhere between The Catcher in the Rye and Even Cowgirls Get the Blues."-Los Angeles Times Book Review

Banished to the hinterlands of Wyoming, rebellious Lydia Callahan and her thirteen-year-old son Sam have no choice but to cope. But while Lydia drinks and talks to the moose head on the wall, Sam finds a friend in local girl Maurey Pierce.

Sam and Maurey set out to discover for themselves what happens in the "skipped parts" of the novels they read – between the first kiss and the next morning. With Lydia's support the two teens set out on their sexual exploration, and deal with its consequences.

One of the wildest, raunchiest, most heartfelt coming-of-age novels of the past thirty years, Skipped Parts puts Tim Sandlin in the upper echelon of contemporary comic novelists.

What readers are saying about Skipped Parts:

"Plot twists that would make J.K. Rowling jealous, humor, beautifully drawn characters, a great sense for the detail of the West"

"poignant, FUNNY, SHOCKING, and even heartbreaking"

"the deep humor comes from the extraordinary characters"

"funny, sad, and full of heart"

What reviewers are saying about Skipped Parts: