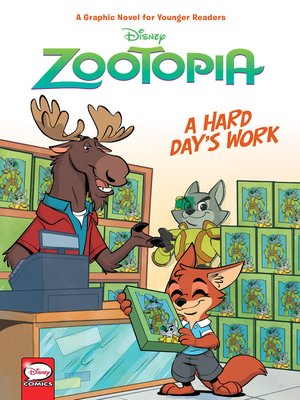 View more libraries...
A young Judy Hopps and a young Nick Wilde put their skills to the test and pave the way for their futures in two stories created especially for younger readers!
Nothing gets past Judy Hopps, future police officer and school detective extraordinaire, as she searches for clues in the unsolved mystery of her teacher's missing necklace. Is it lost or has it been stolen? Judy must use her crime-solving skills to crack the case. Meanwhile, a new Foxtastic action figure has been released and Nick can't wait to get his hands on one! The only problem is . . . getting the money to buy one. Have an odd job to do? Nick's just the fox to do it! Join Nick for a lesson on how to make an honest buck with the help of some unexpected assistants.
This story collection from writer Jimmy Gownley (Amelia Rules!) and artist Leandro Ricardo da Silva, with colors by Wes Dzioba (Serenity, Star Wars: Invasion, Aliens vs. Predator: Three World War) and letters by Chris Dickey (Cable, X-Men: The Hidden Years), collects two stories from the world of Zootopia. They're written especially for younger readers, but will appeal to fans of all ages! Bonus story-related activities and special features are also included in this volume.