The Making of a Gentleman 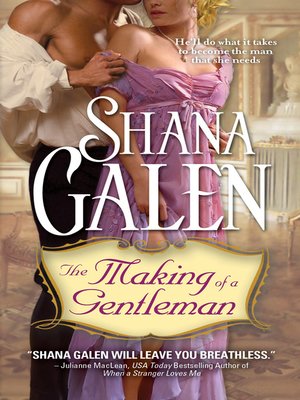 Twelve years in prison has stripped him of his humanity...Saving him is her only chance to escape a terrible fate

Armand, Comte de Valère has lost the ability to interact with polite society, until his family hires him a beautiful tutor, and he starts to come alive again.

Felicity Bennett vows she'll do whatever it takes to help Armand fight back the demons that have held him captive for so long.

With Felicity's help, Armand begins to heal, until a buried secret threatens to destroy their growing passion.

Equal parts action and desire, fans of Sabrina Jefferies and Stephanie Laurens will be sucked in by this heart wrenching tale of family, intrigue, and learning what it means to love.

The second in RITA nominee Shana Galen's Regency romance trilogy about three brothers struggling to reconnect and restore their noble heritage in the aftermath of the French Revolution, each losing his heart along the way.

Fiction Romance Historical Fiction
The Making of a Gentleman