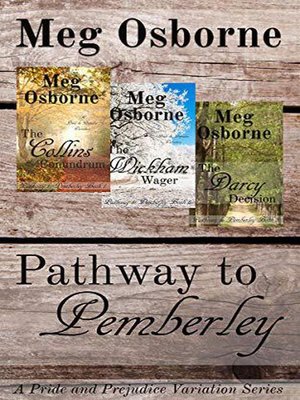 ** All three books of the Pathway to Pemberley series - Collected into one volume! **

The Collins Conundrum - All seems well, as far as Elizabeth Bennet can tell. Jane is in love with Bingley, and he with her. Surely marriage is only a short time away. But for Mrs Bennet, securing the eligible bachelor under her roof is a better protection against future poverty than hoping for the prospect of another. And so it is that Elizabeth returns home one day to find her sister engaged, not to Mr Bingley, but to the rather more dreadful prospect of their cousin, Mr Collins.
Begging her father to intervene, the marriage is delayed unless and until Mr Collins can convince Jane to marry him for his own merits, rather than upon her mother's interference. This sets the redoubtable Mr Collins a task, and he recruits eager Mary Bennet to help him "win fair Jane." Elizabeth refuses to leave matters to chance, and instead is determined to thrust her sister and Mr Bingley back into one another's circles again, although this means being at close quarters with Mr Darcy, a man who she so dislikes. Her actions have another unintended consequence, however, when Mr Bingley's wavering attachment to Jane begins to consider fixing to another fair maiden - Elizabeth herself.

The Wickham Wager - George Wickham is drowning in debts, until his friends propose an amusing wager: can he win Elizabeth Bennet's heart? Money and challenge is reason enough for him to take on the bet, but when he realises that in securing Elizabeth's affections, he might also strike a blow to Fitzwilliam Darcy his goal is clear.
Elizabeth Bennet and Mr Darcy are navigating an icy friendship after her refusal of his unexpected proposal. Elizabeth struggles to align the friendly Mr Wickham of her acquaintance with the rake Mr Darcy deems him, and assumes this is yet another example of Darcy's pride blinding him to a person's true nature on account of their social position. As she grows increasingly aware of the truth, however, she realises that in this instance it was her own pride blinding her to Darcy's true nature. Her new understanding of Darcy's character prompts the realisation that she does love him, after all, but can she dare to hope he still cares for her?

The Darcy Decision - Mr Darcy and Elizabeth Bennet have finally confessed their true feelings for one another and decided to marry - and not even Mr Bennet's opposition will prevent their future happiness. Their friends support the match, even if Elizabeth's father remains an obstacle, and the group departs to London for Christmas.
Caroline Bingley seems to be the only person of their party to recognise the true folly of the match, and will stop at nothing to force Fitzwilliam Darcy to see sense, even if that means involving his own aunt, Lady Catherine de Bourgh, who is surely against such a marriage...
Can Darcy and Elizabeth overcome this last opposition even from those close to them and learn from the obstacles they have faced thus far on their journey to happily ever after?