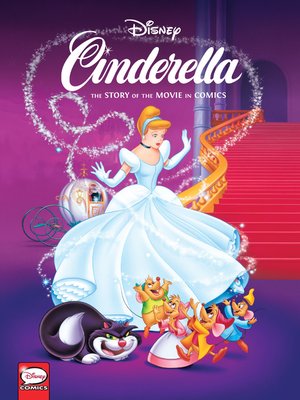 View more libraries...
Experience the magic of the celebrated classic animated film in this retelling of the Disney fairytale.
Cinderella is a young, kind, and diligent girl who is forced to work as a servant in her own home by her wicked stepmother and her two evil stepsisters. But Cinderella dreams of what could be, and makes the best of everything with her animal friends. When the entire kingdom is invited to a royal ball, Cinderella's cruel stepmother prevents her from attending. Luckily, Cinderella's Fairy Godmother appears with her magic, and Cinderella will go to the ball in her own carriage, gown, and glass slippers . . . and she will meet the Prince! But she only has until the stroke of midnight, when the spell will be broken.
Originally released in 1950, Disney Cinderella was the twelfth Disney animated feature film. Celebrate the 70th Anniversary of Cinderella with this hardcover graphic novel retelling!