ebook ∣ and Other Powerful "Jules' Rules" for Success in any New Relationship! 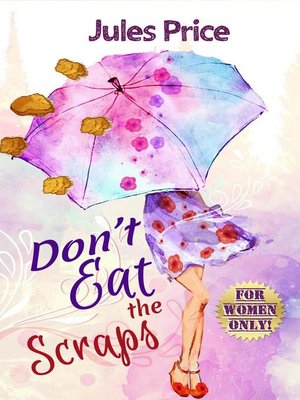 "Don't Eat the Scraps" describes the crucial and (as of now!) unknown theory of a behavior that men exhibit in the first six to eight weeks in dating. Women everywhere find themselves scratching their head, asking themselves the chin-quivering question, "Where did it all go wrong?"

In a lighthearted, provocative and hilarious way, Jules lays out all the things that women need to know in order to navigate, step-by-step, through the first months of any relationship, armed with some of the soundest Jules' Rules dating advice they'll ever receive to overcome future hurdles (and scraps!). It is a one-stop guide to thriving in the murky waters of the dating world... and have a few out-loud chuckles along the way.

Why aren't MEN allowed to read the book, you ask? It is not a male-bashing book by any means! But if they were to become aware of their own unintended pattern of scrap-flinging behaviors, they would start implementing anywhere from minuscule to dangerously large changes that would ultimately affect the entire balance of this delicate relationship equation.

Armed with this new alarming knowledge, men's behavior would most certainly morph into some kind of odd and unique strain of the original virus that would be much harder to identify, combat, and eventually eradicate! We simply need more women to understand that this pattern exists so that we don't misconstrue their intentions, and we can all live harmoniously.

So please, for the sake of all man and womankind, no men allowed...

A MUST-READ, hilarious and considerate insight into how men and women interact and ultimately misunderstand each other's intentions. Here's the secret key to go from "Scrappiness" to "Happiness!!"