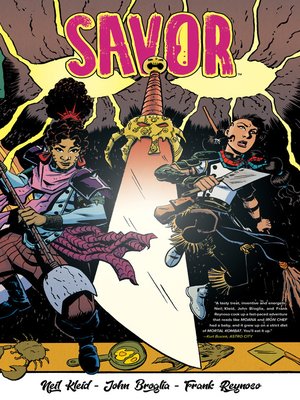 View more libraries...
An adventuring chef must face five deadly restaurants, assemble the ultimate knife, and defeat a band of pirate cooks to save her island and the woman she loves.
Warrior chef Savor Batonnet has returned home, to the island of Earth's Oven, after years away. When she learns that a crew of demonic pirate cooks has captured both the island and her family, Savor has to take on her very first quest as a newly minted hero! But are being called a "hero" and a handful of skills all the ingredients she needs to face five deadly restaurants, forge the world's most powerful knife, save both her parents and the woman she loves?
Creators Neil Kleid (Brownsville, Kings and Canvas, Powers: The Secret History of Deena Pilgrim), John Broglia (God Complex, Zombie-Sama) and Frank Reynoso (Kings and Canvas, The Sweetness) serve up a bite-sized story about finding your way, food fighting, family, fun and adventure! Fans of video games and cooking competitions will enjoy this all ages graphic novel.