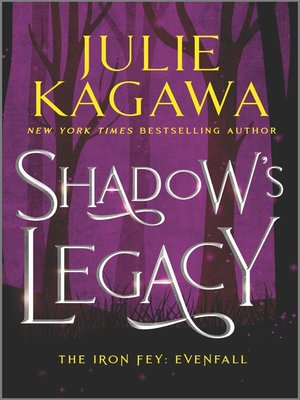 View more libraries...
A new novella set in the world of the New York Times bestselling Iron Fey series! This magical short story is the prelude to a new trilogy in Julie Kagawa's brilliant faery world, The Iron Fey: Evenfall.
A royal wedding, a mysterious assassin, a new threat to all of Faery...
Friends and family gather to celebrate the wedding of the Iron Queen Meghan Chase's brother...but one wedding guest feels more melancholic than the rest. The King of the Forgotten can't forget his own lost love and slips away from the festivities...only to be attacked by a strange faery who calls him a fraud and a false king. Now the two must form a wary alliance to track a strange new threat, a creature of rage and hatred that threatens the newfound peace of Faery, in the opening to a grand new adventure in the enthralling world of the Iron Fey.
THE IRON FEY: EVENFALL
The Iron Raven
The Iron Sword
THE IRON FEY:
The Iron King
The Iron Daughter
The Iron Queen
The Iron Knight
The Iron Prince
The Iron Traitor
The Iron Warrior
Novellas:
Shadow's Legacy (Evenfall #0.5)