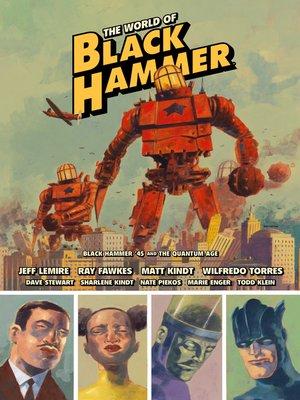 View more libraries...
An expanded look at the past and future of Jeff Lemire and Dean Ormston's Eisner Award-winning Black Hammer universe, with two complete series drawn by Wilfredo Torres and Matt Kindt!
Far in the future of Black Hammer, a collection of superheroes, inspired by the legendary heroes of Black Hammer Farm, must band together to save the planet from an authoritarian regime.
During the Golden Age of superheroes, an elite Air Force crew called the Black Hammer Squadron bands together to combat the Nazis, a host of occult threats, and their ultimate aerial warrior the Ghost Hunter.
Collects The Quantum Age and Black Hammer '45 in a digital book format with a new cover, sketchbook extras, and more!