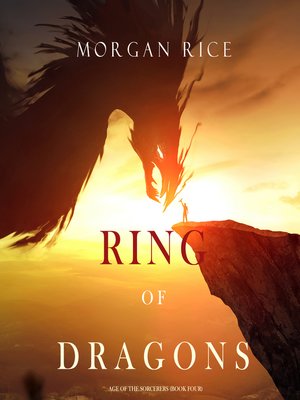 "Has all the ingredients for an instant success: plots, counterplots, mystery, valiant knights, and blossoming relationships replete with broken hearts, deception and betrayal. It will keep you entertained for hours, and will satisfy all ages. Recommended for the permanent library of all fantasy readers."—Books and Movie Reviews, Roberto Mattos (re The Sorcerer's Ring)"The beginnings of something remarkable are there."—San Francisco Book Review (re A Quest of Heroes)From #1 bestseller Morgan Rice, author of A Quest of Heroes (over 1,300 five star reviews) comes a startlingly new fantasy series.In RING OF DRAGONS (Age of the Sorcerers—Book Four), Ravin has the capital surrounded. With the cowardly Vars at the helm, and with only tides and walls left to protect it, the city lies in chaos and near ruin. Just one battle remains between survival and destruction.The boy, meanwhile, holds the secret of the King's assassination. Will he reveal it in time and change the fate of the capital?Will Devin finish the unfinished sword? Will Lenore pursue her love for Devin? Will Greave find the cure in time to save his sister?And will Nerra rise up to lead an army of dragons?AGE OF THE SORCERERS weaves an epic sage of love, of passion, of sibling rivalry; of rogues and hidden treasure; of monks and warriors; of honor and glory, and of betrayal, fate and destiny. It is a tale you will not put down until the early hours, one that will transport you to another world and have you fall in in love with characters you will never forget. It appeals to all ages and genders.Book #5 will be available soon."A spirited fantasy ....Only the beginning of what promises to be an epic young adult series."—Midwest Book Review (re A Quest of Heroes)"Action-packed .... Rice's writing is solid and the premise intriguing."—Publishers Weekly (re A Quest of Heroes)