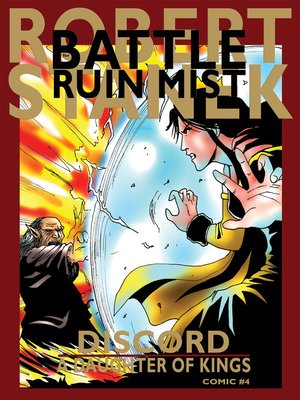 A decade before the events of the bestselling author Robert Stanek's epic Ruin Mist, Kingdoms and Dragons books, a princess named Delinna Alder touches one of the Four Orbs crafted by Dnyarr, the last great Elf King of Greye, and is transformed forever. But Princess Delinna Alder has much to learn about the lethal price of being both within time and outside its bounds. This special edition comic, Discord (A Daughter of Kings, Comic #4), completes the never-before-told story of Delinna's journey into exile. Read Betrayal (A Daughter of Kings, Comic #1), Deliverance (A Daughter of Kings, Comic #2), Rebirth (A Daughter of Kings, Comic #3) and then Discord (A Daughter of Kings, Comic #4) to see the origins of the tragic romances that will eventually tear nations apart and destroy worlds. Robert Stanek is the bestselling author of the epic series Ruin Mist Chronicles, which includes Keeper Martin's Tale, Kingdom Alliance, Fields of Honor, and Mark of the Dragon and which was also released for young adults as The Kingdoms and the Elves of the Reaches #1 - #4 and In the Service of Dragons #1 - #4. He has also written many other novels and short stories, and is well-known for his Bugville Critters children's picture book series. It's been a fairly open secret that Robert Stanek is the name of the more familiar bestselling author, William Stanek. His books have been bestsellers on Amazon.com, Barnesandnoble.com, Audible.com, and Apple iTunes. Robert's "Stormjammers" received a full-page review in The Journal of Electronic Defense. A review by the JED is as high an honor as it gets with a book by a military flyer.