When You Give a Rogue a Rebel 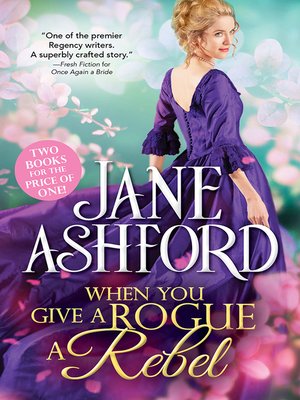 Two sparkling stories for the price of one! A duo of sweet historical romances from "one of the premier Regency writers," author Jane Ashford.

The Repentant Rebel:
At age 17, Diana Gresham eloped with a rogue who left her before even reaching Gretna Green. After years hiding this secret, she thinks she's finally due for some joy in her life again when she meets kind Captain Robert Wilson. Just as things are looking up, Diana's past lover returns, threatening to reveal her secret if she won't marry him to secure his position with her wealth. Is keeping her secret worth losing Robert's love?

Meddlesome Miranda:
Miss Miranda Dennison's improper appetite for adventure lands her in a maze of romance and intrigue when she meets the mysterious Alan Creighton on an isolated estate straight out of a gothic novel... Now Miranda might be in over her head—both in love and danger. Can she find her way to a happy ending before it's too late?

"Jane Ashford absolutely delights."—Night Owl Reviews TOP PICK for Nothing Like a Duke