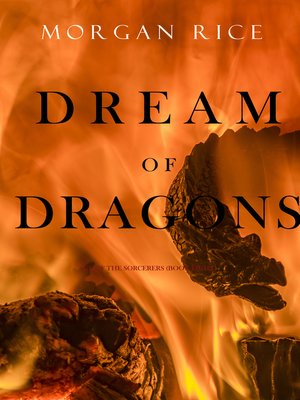 "Has all the ingredients for an instant success: plots, counterplots, mystery, valiant knights, and blossoming relationships replete with broken hearts, deception and betrayal. It will keep you entertained for hours, and will satisfy all ages. Recommended for the permanent library of all fantasy readers."—Books and Movie Reviews, Roberto Mattos (re The Sorcerer's Ring)"The beginnings of something remarkable are there."—San Francisco Book Review (re A Quest of Heroes)From #1 bestseller Morgan Rice, author of A Quest of Heroes (over 1,300 five star reviews) comes a startlingly new fantasy series. DREAM OF DRAGONS is book #8—and the finale—in Age of the Sorcerers. The series begins with book #1 (REALM OF DRAGONS), a #1 bestseller with over 400 five-star reviews—and a free download!In DREAM OF DRAGONS (the series finale), the great war between dragons and humans finally unfolds. The entirety of the kingdom is threatened, with the dragons' aim set for Royalsport. A prophecy will come to fruition, while a new menace in the south threatens to tip the balance of power, and Queen Lenore must defend her capital as best she can under dire circumstances.Will she prove herself worthy of the throne?Will Royalsport survive?And will Lenore and Devin finally be together?AGE OF THE SORCERERS weaves an epic sage of love, of passion, of sibling rivalry; of rogues and hidden treasure; of monks and warriors; of honor and glory, and of betrayal, fate and destiny. It is a tale you will not put down until the early hours, one that will transport you to another world and have you fall in in love with characters you will never forget. It appeals to all ages and genders.Book #8 is the series finale!"A spirited fantasy ....Only the beginning of what promises to be an epic young adult series."—Midwest Book Review (re A Quest of Heroes)"Action-packed .... Rice's writing is solid and the premise intriguing."—Publishers Weekly (re A Quest of Heroes)