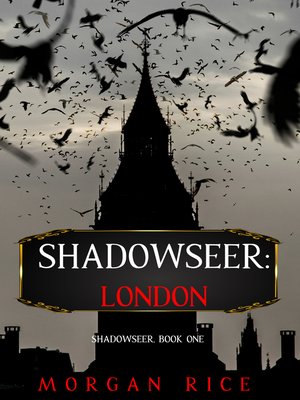 "This novel succeeds—right from the start.... A superior fantasy...It begins, as it should, with one protagonist's struggles and moves neatly into a wider circle...."–Midwest Book Review (re Rise of the Dragons)"Filled with non-stop action, this novel is sure to keep you on the edge of your seat from cover to cover....Rice is setting up for an amazing series to rival series such as Tamora Pierce's Song of the Lioness, with her strong female protagonist making waves in her world and building the confidence of young women in ours."–The Wanderer, A Literary Journal (re Rise of the Dragons)From #1 bestselling author Morgan Rice, a USA Today bestseller and critically-acclaimed author of the fantasy series The Sorcerer's Ring (over 3,000 five-star reviews) and the teen fantasy series The Vampire Journals (over 1,500 five-star reviews) comes a groundbreaking new series and genre, where fantasy meets mystery.SHADOWSEER: LONDON (Book One) tells the story of Kaia, 17, an orphan coming of age in the Victorian London of the 1850s. Kaia yearns to escape her horrific orphanage, to discover who her parents were, and to understand why she can sense shadows when others cannot. Yet the streets of London are as brutal as the orphanage, and for Kaia, there is no easy way out.When Kaia, arrested, faces an even worse punishment, Detective Pinsley, 45, notices a strange marking on her arm and thinks she might be the key in solving a peculiar, mysterious case. Bodies are turning up dead in London, and Pinsley wonders whether it's the work of a deranged serial killer, or of something....else. The methods of murder seem impossible, as does the murderer's ability to escape death.Kaia is given a choice: help solve the case, or be shipped off to Bedlam, the notorious insane asylum.Unlikely partners, each mistrusting the other, Kaia and Pinsley embark to scour the dark corners and cobblestone streets of 19th century London in search of clues.Yet what they find may shock and horrify even them.Dark fantasy meets mystery in SHADOWSEER, a page-turning, atmospheric thriller packed with authentic period detail, with twists and cliffhangers that will leave you on the edge of your seat. Kaia, a broken hero, will capture your heart as she struggles to claw her way up from the depths, and to solve unsolvable crimes. Fans of books such as Spellbreaker, The Dresden Files, Mortal Instruments and Dr. Jekyl and Mr. Hyde will find much to love in SHADOWSEER, satisfying fantasy fans who appreciate mystery and suspense, and mystery lovers who want something new, a clean hybrid that will appeal to both adult and young adult readers. Get ready to be transported to another world—and to fall in love with characters you will never forget."Morgan Rice proves herself again to be an extremely talented storyteller....This would appeal to a wide range of audiences, including younger fans. It ended with an unexpected cliffhanger that leaves you shocked."–The Romance Reviews (re the paranormal series Loved)"The beginnings of something remarkable are there."–San Francisco Book Review (re the young adult fantasy A Quest of Heroes) SHADOWSEER: PARIS (Book #2), SHADOWSEER: MUNICH (Book #3), SHADOWSEER: ROME (Book #4) and SHADOWSEER: ATHENS (Book #5) are also available.