All Things That Deserve to Perish 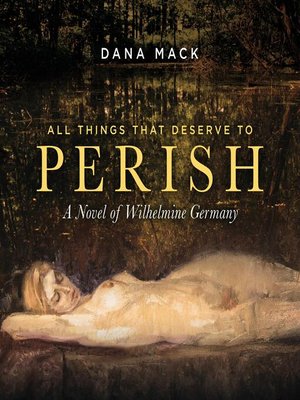 "[A] vivid and incisive historical novel set in Germany and Austria in the 1890s..." -Publisher's Weekly BookLife

The year is 1896, and Elizabeth ('Lisi') von Schwabacher, the gifted daughter of a Jewish banker, returns home to Berlin from three years of piano study in Vienna. Though her thoughts are far from matrimony, she is pursued by two noblemen impressed as much by her stunning wealth as by her prodigious intellect and musical talent.

Awakened to sudden improvements in the opportunities open to women, Lisi balks at her mother's expectation that she will contract a brilliant marriage and settle down to a life as a wife and mother. In a bid to emancipate herself once and for all from that unwelcome fate, she resolves to have an affair with one of her aristocratic suitors — an escapade that, given her rigid social milieu, has tragic consequences.

All Things That Deserve To Perish is a novel that penetrates the constrained condition of women in Wilhelmine Germany, as well as the particular social challenges faced by German Jews, who suffered invidious discrimination long before Hitler's seizure of power. It is also a compassionate rumination on the distractions of sexual love, and the strains of a life devoted to art.