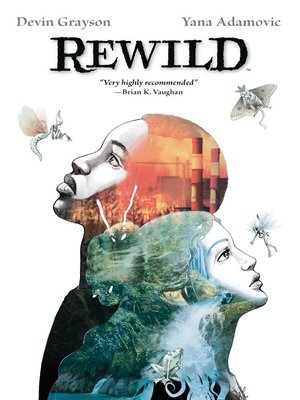 View more libraries...
Fables meets The Fisher King in this dark, magical realist tale about a mysterious young homeless woman, an enterprising engineer with a troubled past, and a dangerous new breed of Fae, ravaged by climate change and furious with the human race.

A motley collection of disturbing mythological creatures have started to stake out the land of those who damaged them—and the planet—and they aren’t backing down. When Poe, an entrancing drifter and self-proclaimed changeling demands that Demond build a park to appease them, he first worries about her grasp on reality, and then, along with his family, his own. Soon, he—and the reader—must question the rationality of our entire species as Demond struggles to save his city… and maybe even the world. But are we past the point of no return?

“Rewild is a profound look at what humanity has lost in the name of progress. It's beautiful, powerful, and through some magic trick simultaneously grim and hopeful.”  - Mark Waid (Kingdom Come)
“ ...a timely examination of humanity’s relationship with the natural world, woven into a glorious fantasy adventure pitting man against Faerie.”  - Mark Buckingham (Fables)