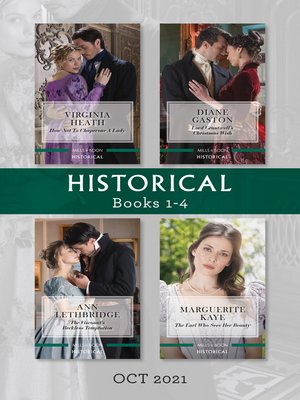 Mills & Boon Historical — Your romantic escape to the past.

How Not To Chaperone A Lady - Virginia Heath

Chaperoning Charity Brookes while she's on a singing tour should be easy for Griffith Philpot — he's spent his whole life sparring with her over her flighty ways! But as he discovers that she's much more than the impetuous girl he thought he knew, a passion ignites between them. Sharing a steamy kiss leaves him torn — he's supposed to be responsible for guarding her virtue!

Lord Grantwell hasn't seen Lillian Pearson since she betrayed him years ago. So, when she arrives on his doorstep looking for sanctuary, he's not inclined to offer it! But, when his orphaned niece and nephew ask if she can stay for Christmas, how can he refuse? Grant and Lillian discover an intense attraction still simmers between them, and Grant starts to wonder if he has done her a grave injustice...

Marcus, Viscount Thorne, has noticed that the season's incomparable, Lady Cynthia, seems set on ruining his beloved cousin's marriage hopes. So Marcus intends to tempt her away with his own play for her affections. Only he soon uncovers Cynthia's very honourable intentions — and a connection so powerful that accepting her invitation to indulge their desire would be a most reckless decision indeed!

The Earl Who Sees Her Beauty - Marguerite Kaye

Prudence Carstairs knows her scars leave her with no romantic prospects — instead, she's content revolutionising her employer's home with her technological marvels. Then he unexpectedly perishes and his mysterious younger brother, dashing Dominic Thorburn, reluctantly takes over. In the new earl, Prudence finally finds someone who meets her gaze without flinching. Might he see the beautiful, intelligent woman beyond her scars?