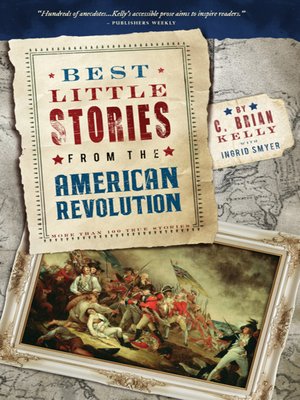 View more libraries...
"A marvelous introduction to the American Revolution..told with wit, compassion, and insight. Brian Kelly not only understands the history, he appreciates the people who made it."  Thomas Fleming, author of The Intimate Lives of the Founding Fathers
The Revolution You Never Knew ...
Beyond the deadly skirmishes, determined generals, and carefully penned words of a powerful declaration lie countless forgotten stories that tell the tale of our nation'~ birth. Read intimate accounts of the fight for independence as colonial families recall their tense encounters with brutal British soldiers, women participate in military initiatives and become powerful social advocates, and leaders reveal the intricacies of their motivations and personal lives. Join the ranks of America's first Patriots as they unite to declare their independence:
****
Old Man Wyman of Woburn, nothing more than a mysterious and deadly figure atop a white horse, mounted a solitary pursuit against the British as they retreated from Concord back to Boston, effectively striking fear deep into the hearts of the redcoats as he diminished their numbers one-by-one.
****
Inventor David Bushnell, desperate to aid the outnumbered American naval forces, both befuddled and alarmed British forces when he devised a working prototype for the world's first underwater torpedo and-most impressively  a submersible boat dubbed the "Turtle," America's first submarine.
****
South Carolina sisters-in-law Grace and Rachel Martin, carrying rifles and dressed in their husbands' clothing, intercepted important dispatches bound for a nearby British fort when they ambushed the courier and two armed escorts by brandishing their weapons and speaking with deep voices.