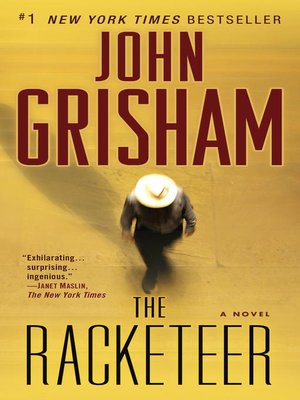 View more libraries...
#1 NEW YORK TIMES BESTSELLER • “The Racketeer is guilty of only one thing: keeping us engaged until the very last page.”—USA Today • In the history of the United States, only four active federal judges have been murdered. Judge Raymond Fawcett has just become number five.
His body is found in his remote lakeside cabin. There is no sign of forced entry or struggle. Just two dead bodies: Judge Fawcett and his young secretary. And one large, state-of-the-art, extremely secure safe, opened and emptied.

One man, a former attorney, knows who killed Judge Fawcett, and why. But that man, Malcolm Bannister, is currently residing in the Federal Prison Camp near Frostburg, Maryland. Though serving time, Malcolm has an ace up his sleeve. He has information the FBI would love to know. Malcolm would love to tell them. But everything has a price—and the man known as the Racketeer wasn’t born yesterday.