I'm Not Done with You Yet 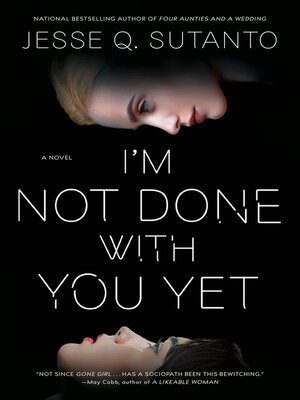 View more libraries...
Some friends—and friendships—are worth killing for in this dark, twisty suspense novel by national bestselling author Jesse Q. Sutanto.
Jane is unhappy.
A struggling midlist writer whose novels barely command four figures, she feels trapped in an underwhelming marriage, just scraping by to pay a crippling Bay Area mortgage for a house—a life—she's never really wanted.
There's only ever been one person she cared about, one person who truly understood her: Thalia. Jane's best and only friend nearly a decade ago during their Creative Writing days at Oxford. It was the only good year of Jane’s life—cobblestones and books and damp English air, heady wine and sweet cider and Thalia, endless Thalia. But then one night ruined everything. The blood-soaked night that should have bound Thalia to Jane forever but instead made her lose her completely. Thalia disappeared without a trace, and Jane has been unable to find her since.
Until now.
Because there she is, her name at the top of the New York Times bestseller list: A Most Pleasant Death by Thalia Ashcroft. When she discovers a post from Thalia on her website about attending a book convention in New York City in a week—“Can’t wait to see you there!”—Jane can’t wait either.
She’ll go to New York City, too, credit card bill be damned. And this time, she will do things right. Jane won’t lose Thalia again.